Ever wondered what it would be like to tickle a T-Rex, wrestle a Raptor or breakfast with a Brachiosaurus? As Lead Zoo-Keeper with the fantastic stage show of Erth’s Dinosaur Zoo, Sophie McBean spends her days doing just that. We caught up with Sophie (a few weeks ahead of Swindon shows) for chat about creative story-telling, Dinosaur Zoo’s Australian roots and bringing prehistoric puppet pals to life on stage…

Dinosaur Zoo is no ordinary production – how would you describe it to someone who hasn’t seen the show before?

It’s like going to a wildlife show at the zoo except the wildlife are dinosaurs. And being Dinosaurs the zoo keepers have a big job looking after them. Often we’ll need a kid or two to feed to them, sorry I meant to help feed them.

What preparation is involved in a show like Dinosaur Zoo?

Each puppet is hand made in Australia and is as much mechanics as it is incredible artistry. The puppeteers operate multiple dinosaurs and they know everything about each one so they can bring them to life with its own personality.

Tell us a little about its history – has the show changed in recent years?

The show started with all Australian dinosaurs like Muttaburrasaurus and Australovenator. It’s always been very immersive and a show could happen anywhere from a school to a supermarket. Now some familiar faces from the Cretacious period have joined and there’s some very big carnivores so we need big spaces to fit them. 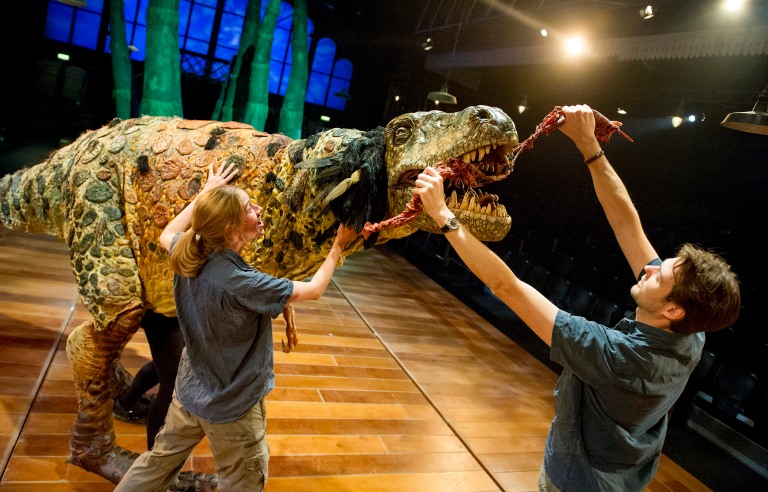 What have you learned from being part of this production? What advice would you give to young aspiring performers?

Learning the art of puppetry was incredible because anything can be a puppet. You can pick up the nearest object  and create a story with it. How does it move? What does it find interesting? You just focus on the puppet as if you are seeing through its eyes and then let your imagination go wild. Create your own shows for anyone that will watch.

Do you have a favourite dinosaur and, if so, why?

Therizinosaurus! It had claws as long as swords and was a therapod like T-Rex but most likely it preferred to just eat plants. I like an unexpected herbivore it’s a bit like a panda that way.

A huge thank you to Sophie McBean and the Dinosaur Zoo team, we look forward to speaking to you again when Dinosaur Zoo Live runs at the Wyvern Theatre in Swindon from Thu 24 – Sat 26 March. For more information and tickets to the show visit the Swindon Theatres website.